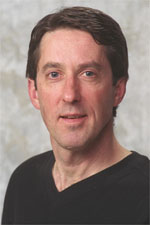 FARM’s Folk Tradition in the Midwest Lifetime Award is being presented to Jim Blum.

Jim Blum has been hosting Folk music programs in Northeast Ohio on the NPR affiliate 89.7 FM, WKSU every weekend for 32 years.  He is also heard around the world on FolkAlley.com, a 24/7 folk music stream with a companion website full on photos, videos, reviews, blogs, and pod-casts.

Jim’s goal early on was to give Folk artists the same professional platform that Classical musicians were already receiving on the radio.  His charm was in being able to reach out of that radio into the hearts of his listeners endearing him to thousands by weaving in his love for the music with his passion for nature, country living, and rescue animals of which he has 10.  Through his early programs his audience discovered Bela Fleck and Alison Krauss for the first time, and Jim continued to introduce bright new talents until his recent retirement in January.

He has received countless awards, including a 1st place PRNDI (Public Radio News Directors Inc.) for his interview with Judy Collins and a Cleveland Press Club award for Best Use of Sound for his environmental series “Beyond the Backyard. ” He has also been recognized with an regional Edward R. Murrow award.

Along with being a radio host and producer, Jim is an actor having appeared in over 100 industrial films and stage productions. He plans to become one of the first to climb Mt. Rainier with a replacement hip.

FARM’s Lantern Bearer Award is being presented to Mark Dvorak.

For the last thirty years, Mark Dvorak has woven together a career from the disparate threads of touring musician, educator and community builder.

He has helped launch no less than five grass-roots arts organizations in the Chicago area, most notably The Plank Road Folk Music Society, and became a key member of the faculty at the Old Town School of Folk Music when that venerable institution was revitalized in the late 1980s.

As a performer, Mark has given concerts in almost all of the United States and made visits to Finland and Ireland. He has released sixteen albums to date of traditional and original music. His songbook ranges across the American heartland, his performances informative and inspirational.

He has won awards for children’s music, journalism and was honored in 2008 with the Woodstock Folk Festival Lifetime Achievement Award.