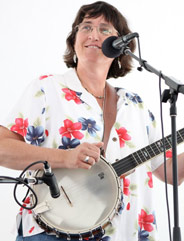 Sally Potter is a powerhouse in the Mid-Michigan folk music community as a singer, song leader and successful producer of acoustic music events. In 2003, she founded the Mid-Winter Singing Festival, a huge gathering of singing enthusiasts for a weekend of musical fun. In 2007, she was awarded a Crystal Award by the City of East Lansing for her “outstanding contribution to community life.”

Given a banjo and a little instruction by her brother, she started performing when she was 14, giving weekly musical programs in nursing homes in Morrison, IL. In college in Champaign, IL, she performed in campus coffeehouses and produced shows, mostly at the Channing Murray Foundation, aka Red Herring Coffeehouse.

In the late 80s and 90s, Potter produced numerous shows benefitting a variety of causes, including the Greater Lansing Food Bank and the Peace Education Center. Potter has also written folk music columns for local publications, including the Lansing State Journal.

She has spent the last eight years as the volunteer booking manager for The Ten Pound Fiddle, lining up talent for 30 concerts per year, from September – May. This is Potter’s third stint on The Fiddle’s Board of Directors, having directed PR in both the late 80s and mid-90s.

Since 2010, the GLFF has included a huge Saturday afternoon Community Sing, funded by individual donations from the Mid-Michigan singing community.

Potter’s work was featured in the New York Times (Feb. 10, 2008), “Shared Song; Communal Memory,” a story and video by NYT music reporter, Ben Ratliff. In 2008, East Lansing’s PBS station, WKAR, produced A Community Sings, a 30 min. documentary of the origins of community singing in Mid-Michigan. Numerous other individuals and communities have been inspired by her success in creating community-based singing programs.

By day, Potter teaches Economics, AP Economics and Civics at Williamston High School in Williamston, MI. By night, she keeps up her own singing with The Arts Chorale of Greater Lansing, performs numerous concerts and programs, and figures out ways more people can have a marvelous time singing great songs – together.

We’re excited that Sally will be introduced by Mark Dvorak at the awards ceremony.