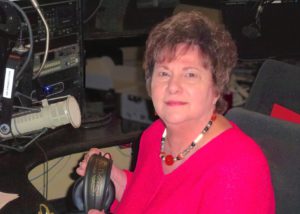 Sue’s lifelong love of Folk music began in her teens with Jewish youth group and a much older brother, who was an avid fan of all kinds of music. Upon hearing that she liked the Folk music of the 1960s, he said she had to hear where it all began and introduced her to the albums of the Weavers from his large record collection.

Moving to Chicago after college in the early 1970s it was finally time to learn to play guitar, leading Sue to enroll in a class at the Old Town School of Folk Music. Guitar classes were not enough, so Sue joined the large community chorus and became a regular at the international folk dance group that took place at the School. Sue also danced with many other international folk dance groups that took place around Chicago, adding Cajun dancing when its popularity grew in the early 1990s. During that time Sue became a board member of the Chicago Folk Dance Council, an umbrella organization that promotes the more than 20 various folk dance groups in the metropolitan Chicago area.

In the early 1980s, as the Old Town School was undergoing a major transition period with its future in some doubt, Sue agreed to take on both the job of volunteer coordinator and the task of creating a membership program. After establishing the volunteer program, she recruited others to take over that job, but remained as Membership coordinator for 9 years as a volunteer, building the membership to 2000 members. Those jobs led to Sue’s appointment to the board of the Old Town School in the early 1980s, where she remains a member to this day. Sue also conceived and helped curate the creation of a history/photo book of the Old Town School’s history. With all of those jobs, the guitar lessons faded away.

Also, during the 1980s Sue got her first taste of live radio, first volunteering at the broadcasts of WBEZ’s “Flea Market” music show, initially broadcast from the Old Town School, later stage managing the broadcasts when the show moved to Chicago’s Navy Pier during the summers. That led to further work for WBEZ including crewing broadcasts of the Chicago Blues, Jazz and Gospel Fests, in charge of compiling the radio logs and PRO credits, which was quite the musical education. She also periodically served as a music consultant, specialty show producer and phonathon shift manager at WBEZ.

Additionally, liking to sing, Sue joined a Sacred Harp group that had begun at Old Town, and then broke off and formed The Chicago Sacred Harp Singers. Sue assisted the group in establishing itself as an independent 501(c)(3) organization. Sue is still singing, but not as much as she’d like to.

Sue became involved in Folk Alliance right from the early years, volunteering to help organize the Chicago conference and attending every international conference since. In 2002 Sue co-founded the annual Folk DJ reception at the International conference, which she is still organizing, including raising the funds to cover the costs of the event. She has attended many of the conferences of the Midwest FAI region over the years, also helping to initiate a Folk DJ showcase and serving on the DJ workshop panel at FARM.

Her work at WBEZ led at first to helping out on Northwestern University’s WNUR “Folk Show”, and then to becoming one of the rotating hosts by 2000. She maintains the Folk CD archives and organizes the phonathon participation of the Sunday “American Roots Block” shows which also includes the Country and Blues shows.

Utilizing her professional skills from her “day job” as the manager of affordable housing for senior citizens, Sue has served on the Old Town School’s Facility committee, recently participating in the design and construction oversight of the School’s newest and third building which provided a greatly needed increase for space and professional dance facilities. The new building reflects a long, exciting and gratifying journey from when Sue started volunteering back in the days when the School’s survival was not assured.

Since 2003 Sue has compiled the artist discography for the Fox Valley Folk Festival’s program book, using the experience she gained from those Chicago festival broadcasts.

And those Weaver LPs that helped start it all? Sue’s nephew made sure that she received those albums when her brother passed away several years ago. A very prized possession.

About the Lantern Bearer Award

The Lantern Bearer Recognition is given to an individual who has contributed locally and regionally to folk performance arts and the folk music and dance community for 25 years or more. The person recognized is selected by—and at the discretion of—the FARM Board of Directors.