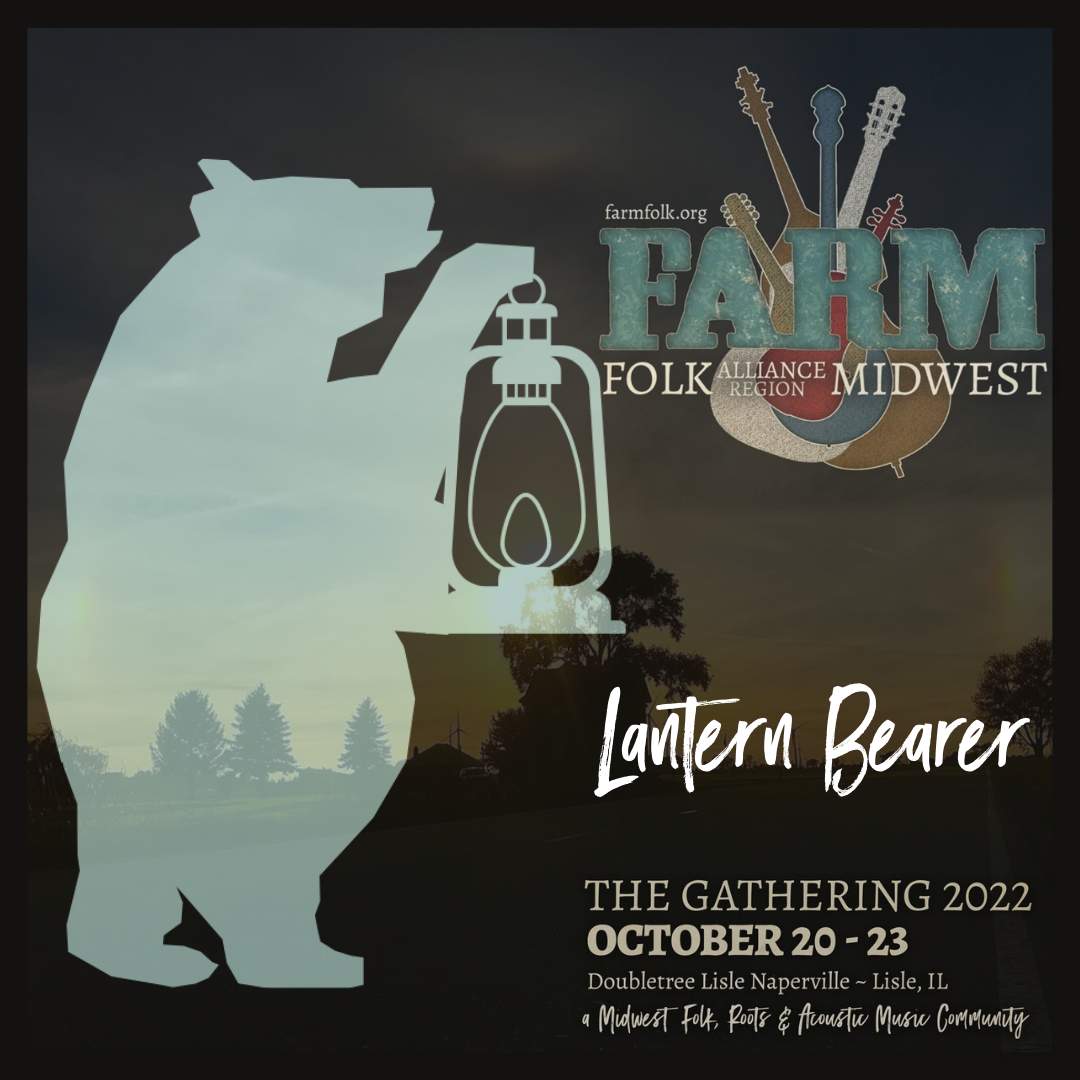 Past recipients of the Folk Tradition in the Midwest Lifetime Achievement Award include:

The FARM Lantern Bearer Award is given annually to recognize an individual, group or organization in the Midwest region who has made significant contributions to the folk performance arts in our community locally and/or regionally. This Award recognizes outstanding members of our community in areas of excellence such as Activism, Community, Cultural/Diversity Inclusion, Folk DJ, Emerging Artists, etc., as a benchmark of their success.

FARM is thrilled to be presenting

with our 2022 Lantern Bearer Award. 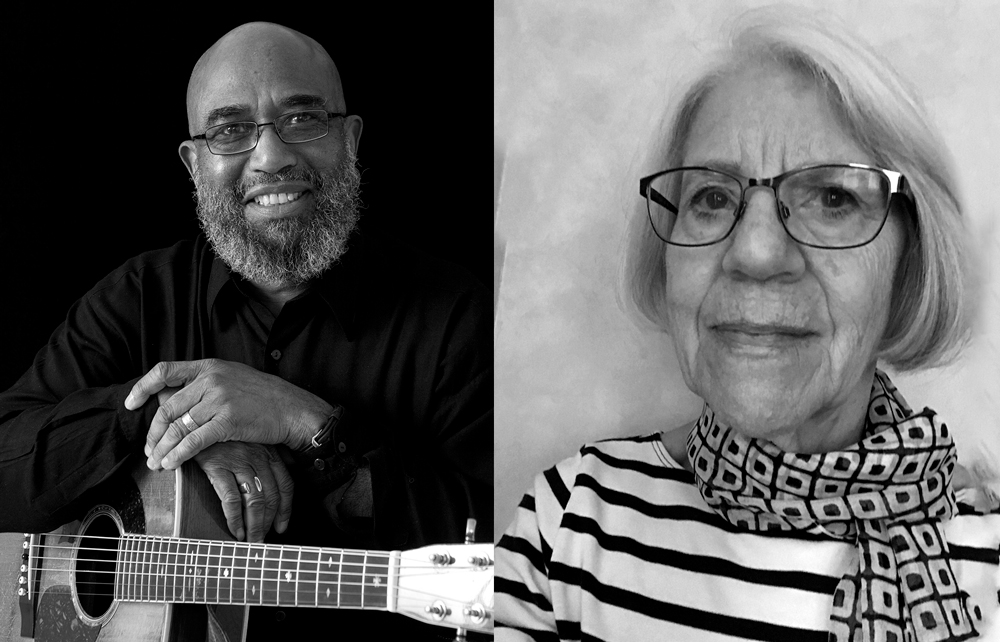 The son of Josh White, one of the most famous performers the blues tradition ever produced, Josh White Jr. has patterned his music after his father’s and has devoted part of his musical life to carrying on his father’s legacy. Yet he has never been simply a Josh White imitator. He has used various media to communicate his message, appearing on television, in films, in clubs, and on stage, making recordings, and very often appearing at schools and local festivals. In all these situations, White’s aim has been not to replicate his father’s music but rather to explore his unique approach to the blues.
At the age of 4, young Josh was immediately initiated into the performing world, taking the stage with his father at New York’s Café Society nightclub in a miniature version of his father’s onstage wardrobe. “I just went along with the program,” White told the Allentown, Pennsylvania, Morning Call. “It was just the thing to do, to wear the suits and put my foot up on the stool like he did—people thought it was cute.” For five years, this father-and-son show toured theaters around the northeast. By the time nine-year-old Josh Jr. won a role in a Broadway play called How Long til Summer?, he was a seasoned theatrical veteran. He won a special Tony award for Best Child Actor in 1949.
In many ways, Josh White Jr. was the African-American voice of the campus folk-music revival. He recorded albums for the major Mercury and United Artists labels in the 1960s, mixing blues with pop fare. “I am so fortunate to have the sort of apprenticeship that I did,” he told the Lincoln Journal Star. “I learned from [my father] what it is to be a good solo performer. When you’re a solo performer, it’s all on you.”
Josh moved to Detroit in 1976, where he continued to record, and became a staple of the late-night television talk show circuit. In 1979 he starred in the first of several PBS concert specials, “Ramblin’ with Josh White Jr.” He toured with Tom Paxton, appearing with him and Odetta in the Soundstage: Just Folks PBS special in 1980.
In 1983 Josh teamed up with friend, Peter Link, to create the one-man show Josh: The Man and His Music, which dramatized his father’s career and revived some of his best-known songs and performances.
White continued to maintain an independent musical identity. His concerts included a variety of material ranging on occasion from Frank Sinatra’s romantic ballad “One for My Baby” to the Garth Brooks country anthem “We Shall Be Free.” He began writing songs for what his Web site terms “single-digit people” and developed a flourishing career giving concerts for children in the 1990s and early 2000s. His concerts for all ages reflected the idealistic values of the folk revival that had nurtured his music in the 1960s, and he told the Columbus Dispatch that he performed “songs that help people take pride in themselves.”
Composed of excerpts taken from a longer biography written by Jim Manheim (used with permission). You can find the full bio at https://biography.jrank.org/pages/2779/White-Josh-Jr.html

Nancy Clark, a folk music fan was most likely influenced by attending a summer camp organized by a Quaker family where morning meeting started the day with songs. The last night of the camp session ended with floats, bearing candles, and everyone singing Peace of the River.

After graduating from Cal (University of California at Berkeley), entering the work world as a computer programmer, and moving to the east coast with stops in Silver Spring, Blacksburg, and Chappaqua, her family moved to the Chicago area…and learned to tune in The Midnight Special. Attended a Joan Baez concert at Symphony Center…heard Rich Warren ask for volunteers to help catalog the folk music library at WFMT. ..suggested this activity to her husband, Peter, which expanded to being supporters of Folkstage, hosting performers, providing meals and transportation, hosting house concerts, joining Folk Alliance, starting a folk music series at the local library as a way of providing some week night gigs for traveling performers…the usual story of one thing leads to another with volunteer activities.

Further testimonial from Board Member, Karen Rigotti:
I have known Nancy Clark for 20 years. She is a long-standing pillar of the folk community and truly is the epitome of all good things relating to folk. She is a former FARM Board Member. She is an enthusiastic, frequent concert attendee and participates in numerous folk activities. Nancy is careful and discerning in researching the endeavors she chooses to support financially and she is/has been a very generous financial supporter of FARM, FAI, and other folk activities. She has opened her home for house concerts, meetings, and homestays for traveling musicians. The musicians she has hosted think the world of her, as do I and so many others in our folk community. She is highly deserving of the FARM Lantern Bearer Award.

FARM has standardized nomination and selection procedures for this award which serves to honor the recipient and increase awareness of and strengthen ties within and beyond the Midwest folk music and dance communities.

Nominations are accepted from any member of FARM, with the finalist(s) selected by the FARM Board of Directors.

All completed nominations will move on to the final round for the 2022 Lantern Bearer Award, after which the Board will select up to four nominees. Award winners will be announced after September 1.