Among the comments your FARM Board has collected on post-conference questionnaires is “Why do we rush off on Sunday when some people could stay, jam and enjoy our mutual good company for longer?”  Taking that to heart we have added a free afternoon with a special concert on Sunday afternoon at 4:00 PM.  We have convinced our California-based FARM attendee and special guest, Ronny Cox and Iowa City local “Dean of Iowa music” Dave Moore to perform at The Mill.  This is a “Town Gown” sort of event.  We are selling tickets to the public AND giving every registered FARM attendee a FREE ticket.  We are pleased to offer this concert event free to every registered attendee of FARM.  Take a moment to invite your own Iowa mailing list and friends and family to this concert.  They’ll be glad to hear of this very special concert from you!  Tickets for the public are available HERE.  If you are attending the conference, and want to attend this great concert, email Nancy Emrich – Freeman. 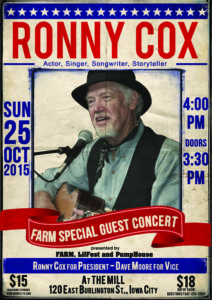 Let’s talk about The Mill – this is a storied Iowa City venue, literally a half block from the Sheraton Iowa City where the conference is being held.  It is the site of the optional Thursday night $10 dinner to which you can buy tickets in advance (tickets must be purchased by Oct 11).  There is no better deal in Iowa – the only caveat being – we need to commit in advance how many people we are serving.  Please sign up on the website, and be sure to indicate your choice of entree, to buy this dinner, if you have not already.
Keith Dempster opened The Mill Restaurant (http://icmill.com) in 1962 as a coffee house/restaurant/folk music venue. It became the center of an Americana music community in Iowa City that achieved national and international fame. In June, 2003 Keith and Pam, closed The Mill. The Mill was important to many people in Iowa City; where local landmarks have been replaced with cookie-cutter buildings and chain restaurants. On July 19, 2003 The Mill was reopened by a group of concerned citizens. Its goals?  To continue to keep The Mill a special place in Iowa City. To be home for local musicians and other creative artists. To bring great artists from outside Iowa to this intimate venue. To be a place where excellent people serve excellent food and drinks at a fair price.  Throughout our preparations of this year’s FARM Conference, we have had excellent support from The Mill and its community which includes The Englert Theatre.
And, now about Ronny Cox, FARM’s honored guest:
While those of us in folk music know of Ronny’ devotion to the folk community, many do not know about his acting career,  These days, he spends less time acting and more time as a singer/songwriter performing at folk festivals, concert venues and small intimate theaters all over the U.S. while also leading annual trips to Ireland.  He is a multi-faceted leader in our community, and very likely, one of the most familiar faces to our future folk audiences.  Because they have seen him on TV screens and in movie houses, a lot of the work he does is “entry level” – a place where the uninitiated find folk music for the first time.  His warm welcome to new folks is palpable in his shows — he starts a show on stage well ahead of the “hit time.”  He welcomes folks as they come in, conversing and story-telling into the show.  Audience members who have come to see ” Dick Jones” in Robo Cop or his recent guest-star role in Dexter (2006-2013) meet folk music in a very warm and welcoming way.
As a result, the Ronny Cox show does not have an opening act, it has a middle act!  The FARM board has enticed Iowa City’s great Dave Moore to the Mill stage once again.  Dave Moore is one of the great songwriters to come out of the state of Iowa.  Known for his elegant songwriting and instrumental prowess on blues guitar, button accordion and harmonica he has become a legend. An early, early recording artist on Red House Records, he toured with Greg Brown in his earliest days of national recognition. Prairie Home Companion was his second home, and Latin America his heart’s home, inspiration and artistic retreat. You may not know Dave Moore, but you will want to.
At this year’s 2015 FARM Conference, Greg Brown, Dave Moore and Ronny Cox are “first-timers.”  Please help welcome them to FARM “with bells on!”
In 2012, Ronny became an author with the release of his book Dueling Banjos: The Deliverance of Drew. The book coincided with the 40th anniversary of the release of the film, and is a collection of stories about the making of the movie and a look behind the scenes of his springboard into Hollywood. Warner Brothers also released a deluxe version of the film that year, and the book is also now available in audio format. Ronny will be available at the Prairie Light Bookstore for a reading and signing on Saturday night at 6PM.  Prairie Lights…